A Guide to Hamilton Street Art

When you view the city as a canvas, beautiful things start to happen.

Hamilton’s street art scene continues to grow and inspire, offering a window into the city’s character and many stories.

Create your own self-guided tour for a street-level gallery experience with our neighbourhood guides to just some of the murals to look for in the city.

We’ve also checked in with some of the artists for their take on the city’s street art scene.

You’ll find one of the largest murals on the street at the corner of Charlton Avenue and Locke Street outside the insanely popular Donut Monster. The talented Hamilton-based artist of Vermillion Sands who hand-painted this vibrant piece have had their work featured in National Geographic and Oprah Magazine among many. This vibrant and whimsical design includes donuts, monsters, dinosaurs, a dragon and other characters straight from a fairytale. The little ducks on the bottom right corner represent the Vanderkwaak family, who own the shop. 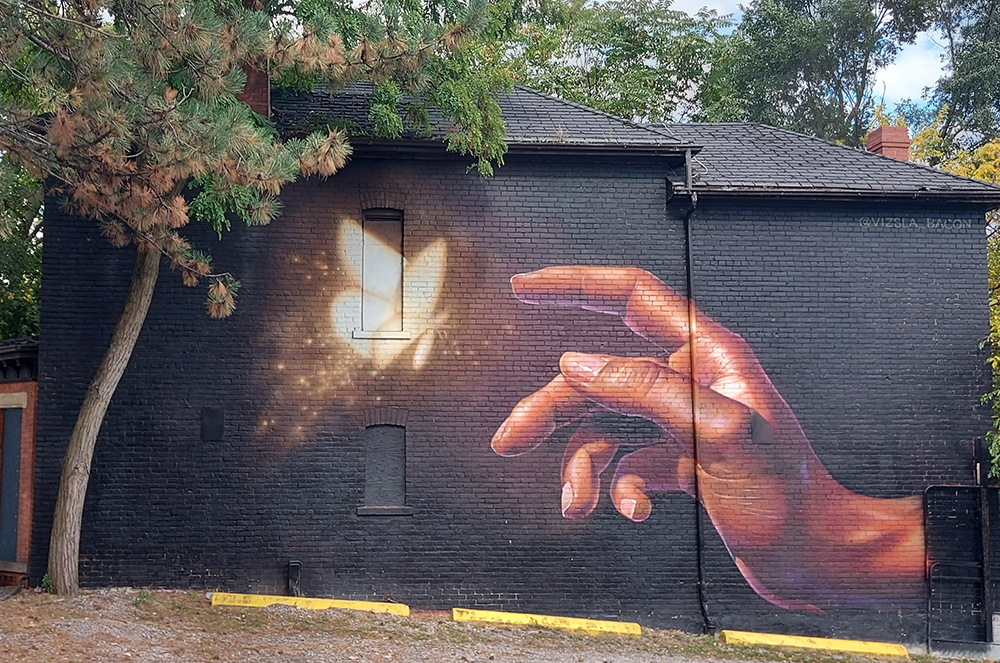 Alexander Bacon is a world-renowned graffiti artist who’s best known for his colourful aerosol pieces. He visited Hamilton to create this detailed hand and butterfly piece during the Concrete Canvas Festival in 2019 (founded by multi discipline local artist Leon Robinson and curated by artist Scott McDonald). Bacon often features animals in his art to raise awareness of endangered species.

This striking piece featuring a huge raven, turtle and other earth elements was a collaboration between Mique Michelle and Kalkidan Assefa during the 2019 Concrete Canvas Festival which welcomed local and visiting muralists to “elevate the visual landscape of the city while simultaneously inspiring a new generation of artists.”

After doing research into the history of the building, brothers Lester and Norman Coloma, wanted to honour the family owned and operated furniture manufacturer that once occupied this space. They painted labourers working hard to “lift a hammer”, symbolizing the grit and determination of Hamiltonians.

“It’s quite exciting to see the diversity of artists and how the city has made accommodations to help nurture the production of art and murals in a public forum. I’m grateful to the community for letting me be a part of this ever growing street art scene in Hamilton.” – Lester Coloma

Catch of The Day

This giant, bold design is actually easy to miss if you’re not looking for it. Find it on Hughson Street behind The French restaurant at King William Street. It was commissioned by Collective Arts Brewing who invited the famed artist WERC to visit Hamilton to create this piece he describes as capturing his creative process. 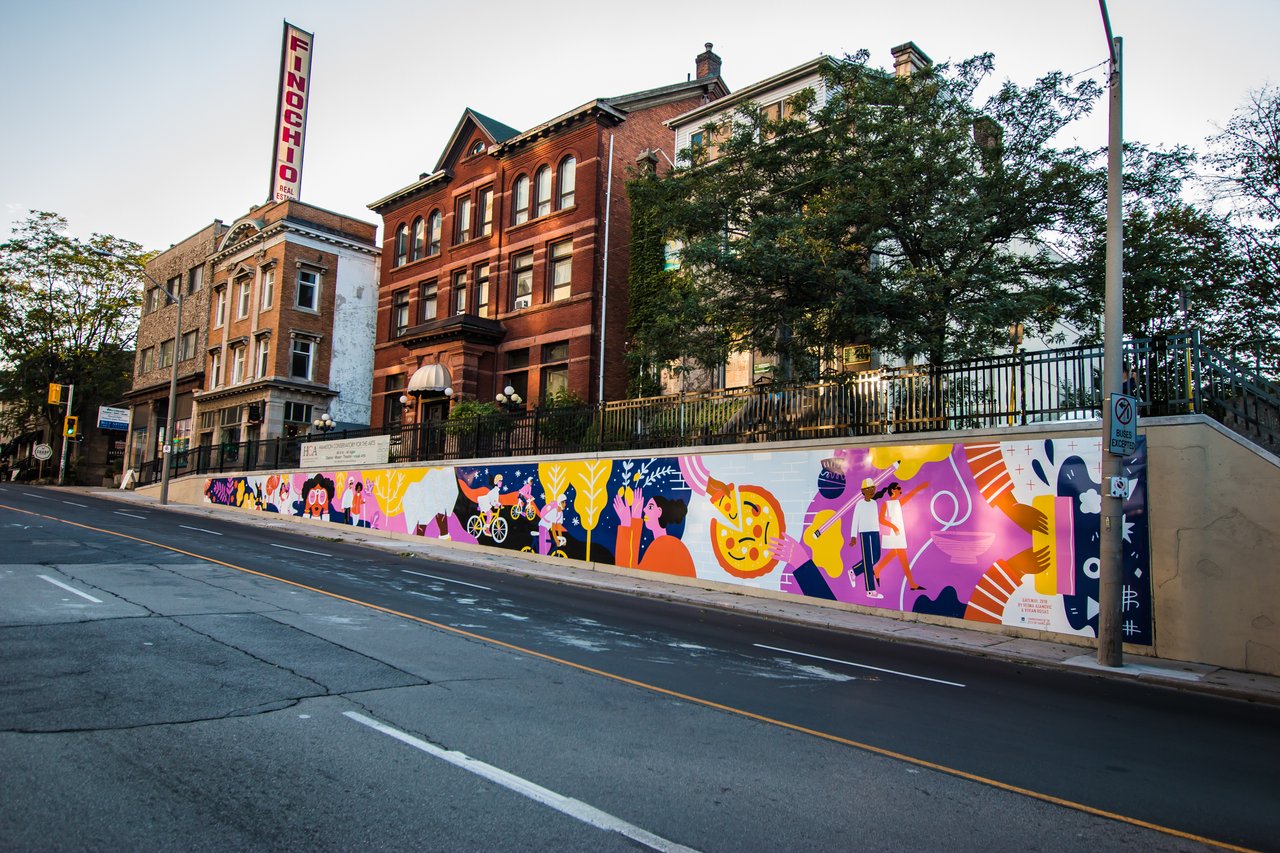 This prominent installation uses bright pink, orange and yellow tones to depict Hamilton’s diversity of people, cultures and landscapes. The mural, part of the City of Hamilton’s Public Art program, helps welcome visitors to the city at the downtown Hunter Street GO Station. 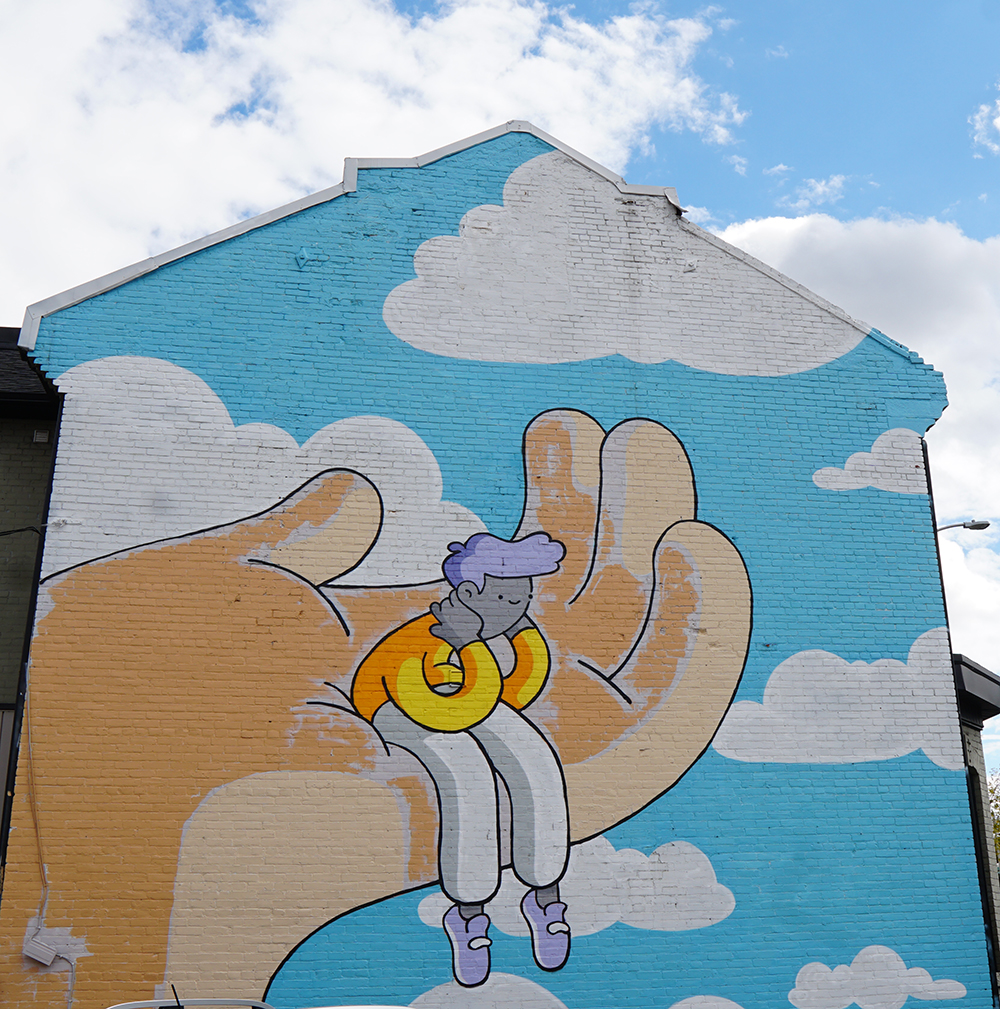 Burnt Toast Creative’s signature doodle pieces can be found across Hamilton and around the world. Scott Martin is the talented artist behind these colourful works and has done illustrations for brands like Dropbox, Facebook and Samsung. This popular piece featuring marshmallow clouds and a cartoon figure sitting on a hand was Martin’s contribution to the 2019 Concrete Canvas Festival.

Hamilton muralist Lester Coloma was commissioned by the dentist who works out of this building to create this striking 120-feet wide mural that pays homage to the history of the Corktown neighbourhood. Look for trees, wolves, bears, and the other elements that used to inhabit the apple, walnut and cherry orchards that were once here.

Nitewaké:non or ‘the place where I come from’ explores artist Melissa General’s relationship to her home Six Nations of the Grand River Territory. The artwork is part of Supercrawl’s 2021 Visual & Public Art programming and is sponsored by McMaster Museum of Art. Look for new artworks in this space annually.

This piece was created by artist Kayla Whitney in collaboration with Thuya Studio, a floral shop that once occupied this space. Whitney ran with creative freedom she was given and adorned the brick wall with colourful floral elements and fruits. Kayla would love to see more diverse artists and believes that Hamilton’s street art scene has a lot of potential and room to grow.

“We have so much space here – so many opportunities to put up great murals!” – Kayla Whitney

It’s hard to miss Hamilton’s north-end music venue and event space Bridgeworks thanks to the huge, colourful mural splashed across its outside wall. The building-sized artwork was inspired by the live music perform inside, according to the trio of artists behind “Clear Eyes Collective” who credit music as a common theme and inspiration for their art.

We wanted the exterior of the building to visually reflect the essence of the performances that take place there. While the inside of the building maintains Hamilton’s industrial charm, we wanted the outside to be easily identified as a place of the arts, and stand out as a landmark in the area. – Clear Eyes Collective

You’ll find this piece by local tattoo and multimedia artist Jordan Warmington, at one of the busiest intersections in the city. This jazzy design is meant to entertain people passing this busy corner or waiting at the light. The local artist was inspired by one of his favourite illustrators, Robert Crumb and his famous “Keep on Truckin” illustration.

“Being that it’s on Main and John, a very busy intersection in the city. I wanted the wall to sort of reflect the street itself and the downtown vibe of the city.” – Jordan Warmington

Hamilton is home to one of only two airworthy Lancaster bombers left in the world. And the only one you can purchase a flight on via the Canadian Warplane Heritage Museum. For those who can't splurge on a flight, there's still lots of ways to marvel at this famous WWII plane with local flyovers, grounded at the museum and now – thanks to local artist Scott McDonald – on this incredible mural near Barton and Queen Streets. 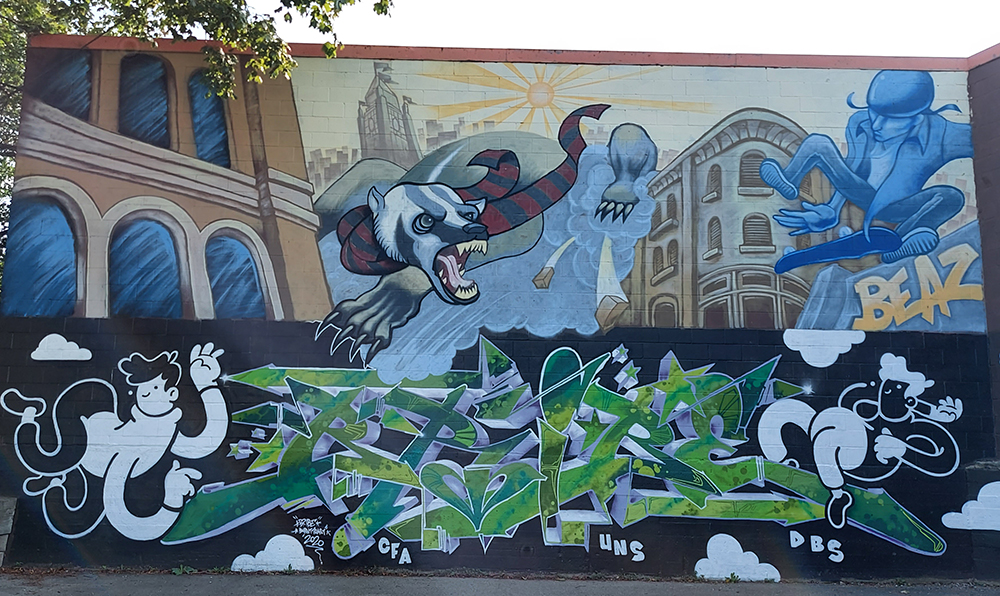 The Beasley Badger on the corner of John and Cannon Streets is Bryce Huffman’s masterpiece. He spray-painted the mascot over the concrete soccer field as a symbol of the tenacity and resiliency of this downtown neighbourhood.

When local graffiti artist Scott McDonald created this tribute to front line health workers in the early days of the pandemic, he captured the emotion and gratitude we are all feeling. The mural was a collaboration with photographer Steve Haining and designer Scott Martin and has struck a deep chord in a city that is home to nine hospitals and hundreds of health centres.

Sometimes, the smallest things can make a big impact. As you explore the downtown, look out for brightly wrapped electric and traffic boxes, each designed by a local artist and chosen through the City of Hamilton’s Public Art Process. Find them all using this map.

It’s no surprise this North End brewery which showcases the work of artists on their cans and bottle labels, is also home to some of the best and biggest murals in the city. In the summer of 2017, five local and international artists spend four weeks painting a large wall on site.

In 2019, the Wall Project grew even larger with more on-site art-making during the brewery’s now annual Collective Arts Festival, most notably a striking purple, pink and blue toned creature by Brooklyn based WERC.

Local muralist Lester Coloma was commissioned to paint this portrait to highlight Hamilton’s claim to fame as “The Electric City”. In the late 1890s, Nikola Tesla helped establish a hydroelectric power plant in the city. With reliable and affordable power now available, Hamilton became an attractive manufacturing destination and “The Steel City” was born. 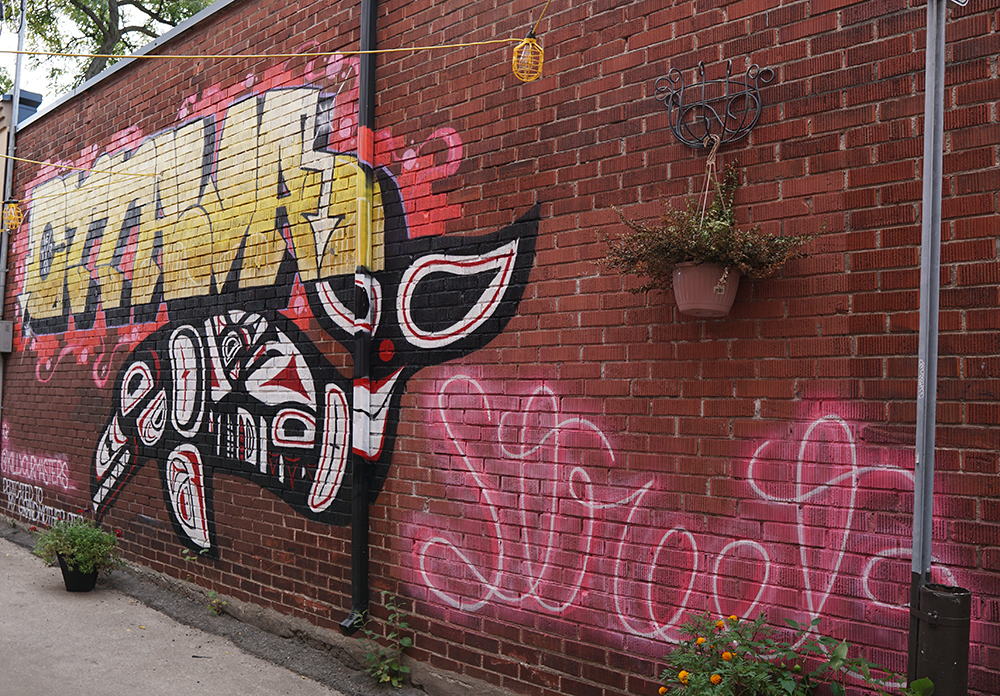 Hamilton artist Kyle Joedicke explored his Indigenous heritage in this mural painted with the word “Ottawa” above an Orca, which symbolizes the strength of family. It was designed in the Haida style, the Indigenous people who traditionally occupied British Columbia and is dedicated to Joedicke’s grandmother. Find it on the wall of MERK Snack Bar overlooking their alley patio.

“The Hamilton art scene is constantly evolving. It’s not restricted to a gallery environment. It’s something that can be experienced anywhere in the city. Whether it’s a mural in your favourite bar, an independent artist set up for Art Crawl, or just the graffiti in the streets.” – Kyle Joedicke

Commissioned in 2016 by the store owner at this location, this landscape piece was created by Tim Nijenhuis, a local multimedia artist in Hamilton. His art, found all over Hamilton, often incorporates trompe-l’oeil style which is an optical illusion that uses realistic imagery. 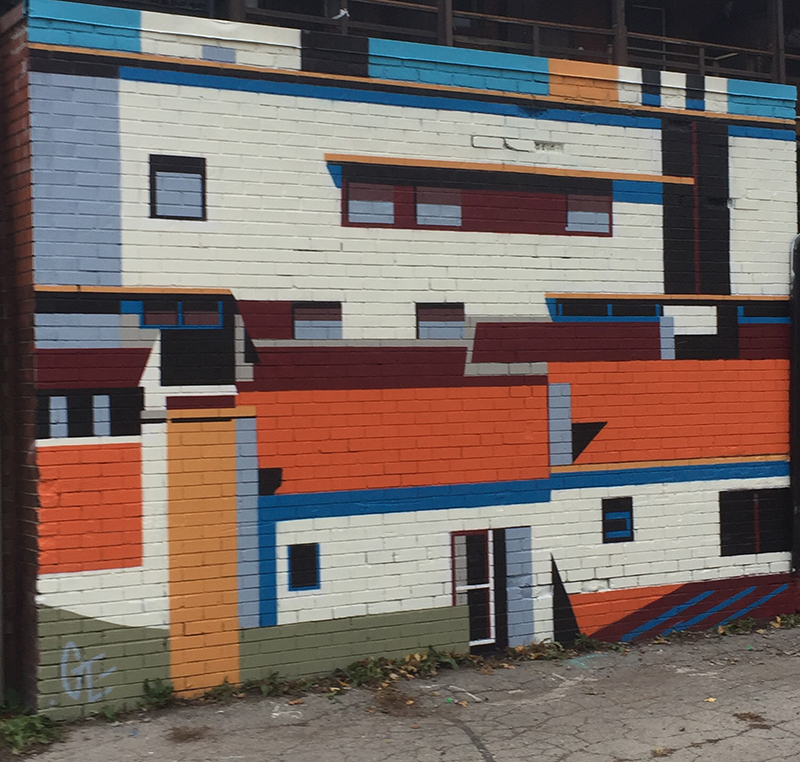 Popular Hamilton painter Gordon Leverton lends his signature style - focused on shadows, buildings, and skyline - to this gorgeous mural inspired by the landscape of Acores, Portugal. Find this slice of Mediterranean inspiration outside of Caro Restaurant, who commissioned the piece, on Ottawa Street North, at Main Street East.

The sprawling and vividly colourful Seven Sacred Grandfather Teachings features seven animals that reflect the oral history and traditions passed down by Indigenous elders from the artist Kyle Joedicke’s Haudenosaunee culture. Find it just off bustling Concession Street across the street from the public library.

On the edge of the Hamilton escarpment, you’ll find an explosion of yellow, blue and green wrapped around this building at the corner of Concession and Summit that brightens up the entire neighbourhood. Completed in 2020, this mural uses artist Tim Nijenhuis’ signature “trick of the eye” style with each window lined with a ray of sunshine.

A huge mural in support of the Black Lives Matter movement was completed in 2020. Organized by @multitaskii, a group of artists adorned the wall of the Mountain Lanes building with a striking image of Breonna Taylor, a portrait of the late civil rights activist and politician John Lewis and a representation of a sit-in at a cafe. Along the wall, there’s also an image of a little girl reading a book, among other symbolic images.

“Both artists (Nick and Elicser) wanted to go beyond just acknowledging and memorializing the fallen. [They] wanted to make people think about the roots of this movement and be confronted with something that is not merely pretty but which talks about the difficult realities people of colour have faced and continue to face.”

Liz Enriquez is an entrepreneur and lover of Hamilton (owner of @ambitiousadulting and @so_hamont). She enjoys exploring cities around the world and has led mural tours and community events in Hamilton with her friends @koe.design @myhappycity_ and @empathic.punk.