A Guide to Downtown Hamilton

Please check ahead for availability, closures and new safety procedures.

Downtown Hamilton is steeped history and pulsing with new energy thanks to new businesses and cultural experiences taking root in the city’s core. It’s where you’ll find some of the city’s leading attractions, eateries, bars, coffeeshops and unique retail.

The restoration of historic buildings and colourful street and public art, help make our downtown a pleasure to explore on foot.

And getting here is now easier than ever thanks to all-day GO Train service coming in and out of the West Harbour station, located on bustling James Street North, steps from the waterfront.

This small, popular Cannon Street spot built a reputation on its delicious soups. The lineup changes daily, but you might find minestrone, mulligatawny, or a hearty loaded baked potato. Added to the mix are salads, burgers and loaded fries.

Some argue Hambrgr on King William’s famed “Restaurant Row” makes the city’s best burger. Its beef is freshly ground and locally sourced. And it’s anything goes for toppings. Sides like onion rings and Buffalo cauliflower bites are wickedly good.

Tacos, tacos and more tacos are the mainstay at this King William fave. Choose from fillings like pork belly, brussels sprouts, fish or beef tongue. They all go well with its tequila – and bourbon-based cocktails and imported beers.

The brew house has a rotating lineup of beers made onsite. The food offerings are designed to pair well with their bold flavours. Nibble on the house-made butter chicken sausage and cheddar-cheese filled pretzels so good you’ll want seconds.

This local favourite has been a staple on Locke Street for more than a decade and recently opened a second location on James Street North. Locals visit at all hours of the day, starting with coffee and delicious scones in the morning, hearty lunch specials and dinner mains like pastas and their famous pizza. Its motto, “Good Ingredients Matter,” is accurate.

This New Orleans-style cocktail and oyster bar is staffed by some serious cocktail experts. Pull up a stool and let them pour you an artful drink. Or pick up one of their amazing cocktail kits so you can play bartender at home.

This twist on a classic sports bar offers a more playful and laid-back alternatives for fans looking to catch a game and a quality menu of great food and craft beer. It’s also co-owned by the lead singer of Hamilton’s Arkells, Max Kerman. If you love nachos and a great brunch, add this to your list! They’re currently open for takeout and patio dining.

For something a little different, head west to Locke Street and grab some seafood to go. This food truck parked semi-permanently in an alleyway serves up whole Canadian lobster by the pound and fresh oysters. They’ll even sell you a professional shucking knife.

Bistro food made with French flair is front and centre at The French, located downtown on King William Street – Hamilton’s newly coined ‘restaurant row’. The menu features the greatest culinary hits of France, from onion soup to steak ‘n frites.

Its chef knows how to make ingredients shine, especially vegetables. Located on the King William Street’s ‘restaurant row’, it pleases meat eaters, vegans and vegetarians equally with its West Coast-driven menu. The vegan ‘cheezcake’ (made with cashews) is a must try.

You’re in good hands with Top Chef Canada alumni Vittorio Colacitti. Ask for the tasting menu and be prepared to experience a wide range of flavours, from steak tartar and the squid ink pasta. Or go casual with thin-crust pizzas and fresh oysters from the raw bar.

If you snooze, you’ll lose. Fresh, baked-from-scratch donuts are snapped up by morning crowds so get to its Locke Street location early. It has the classics (like apple fritters), but also unique varieties, like siracha and lime.

Pull up a seat at this self-described ‘house of free spirits’. This retail cafe is home to a wickedly good coffee bar as well as plenty of unique lifestyle items including motorcycle gear, vintage art and their house brand of apparel and leather accessories.

Visit one of Hamilton's most famous roasters in person at their flagship counter in the Hamilton Farmers’ Market (look for their signature pour-over station) or in their King William Street cafe.

The King Street East landmark has been serving massive crisp breaded schnitzels and hearty German fare since 1967. It regularly draws crowds who adore its kitschy Bavarian dÃ©cor and its generous portions.

The lineups at lunchtime tell you what you need to know. The main attractions at this north-end deli are the hot and cold sandwiches made with house-baked buns. You’ll likely also leave with Portuguese custard tarts and a fresh loaf of crusty bread.

This famed steakhouse has been serving some of the city’s most perfectly cooked cuts since 1969. The filet mignon is a standout, especially with a side of crab legs or bacon-wrapped scallops. Patrons also love the friendly, yet formal, service.

Simple, home cooking has won this family-run restaurant offering Middle-East favourites many loyal customers. Kabobs, shawarma and falafel are the most popular, but do try the special platter. It comes piled high with yellow rice and succulent chunks of grilled meat.

Head downtown for excellent soup. As you eat, you can hear the slam bam of fresh noodles being made in the kitchen. While soups rule, you can also order a stir fry or dumplings. If the noodles are too long to eat easily, ask your server for scissors.

This dessert hangout on King Street East is an export from Hong Kong. It has built a world-wide reputation for tasty desserts that showcase the sweetness of mangos imported from the Philippines.

It’s an ideal place for those looking to grab something with international flavours. Perhaps paneer tacos, homemade ice cream, an authentic muffuletta sandwich, or a quick samosa? Find them all here.

AGH showcases the best of local and Canadian art. With more than 10,000 pieces, the gallery provides a big picture of what’s going on in the art world. New exhibits keep visitors coming back for more as does the fantastic gift shop.

Art lovers will also appreciate some of the smaller galleries downtown. Centre[3] combines exhibit space with workshop and classes. Contemporary art is on display at Hamilton Artists Inc., a sleek, modern artist-run venue. The Assembly on King Street shines the spotlight on the contemporary works of local artists.

Every season, there’s a roster of live, crowd-pleasing performances, from well-known musicals to Canadian productions. Its downtown location is ideal for dinner-and-a-show dates with many dining options close by.

There are big things in store for Hamilton's urban waterfront, including new developments and public spaces. But there's still plenty to do along the shores of one of Canada's most fascinating and hardest working harbours.

Take a walk along the waterfront trail and stop at Parks Canada’s docked HMCS Haida at Pier 9, Theodore Tugboat docked at Pier 8 and camera ready, and visit the outdoor skating rink. Then refuel at Williams Fresh Cafe while watching the boats sail past. 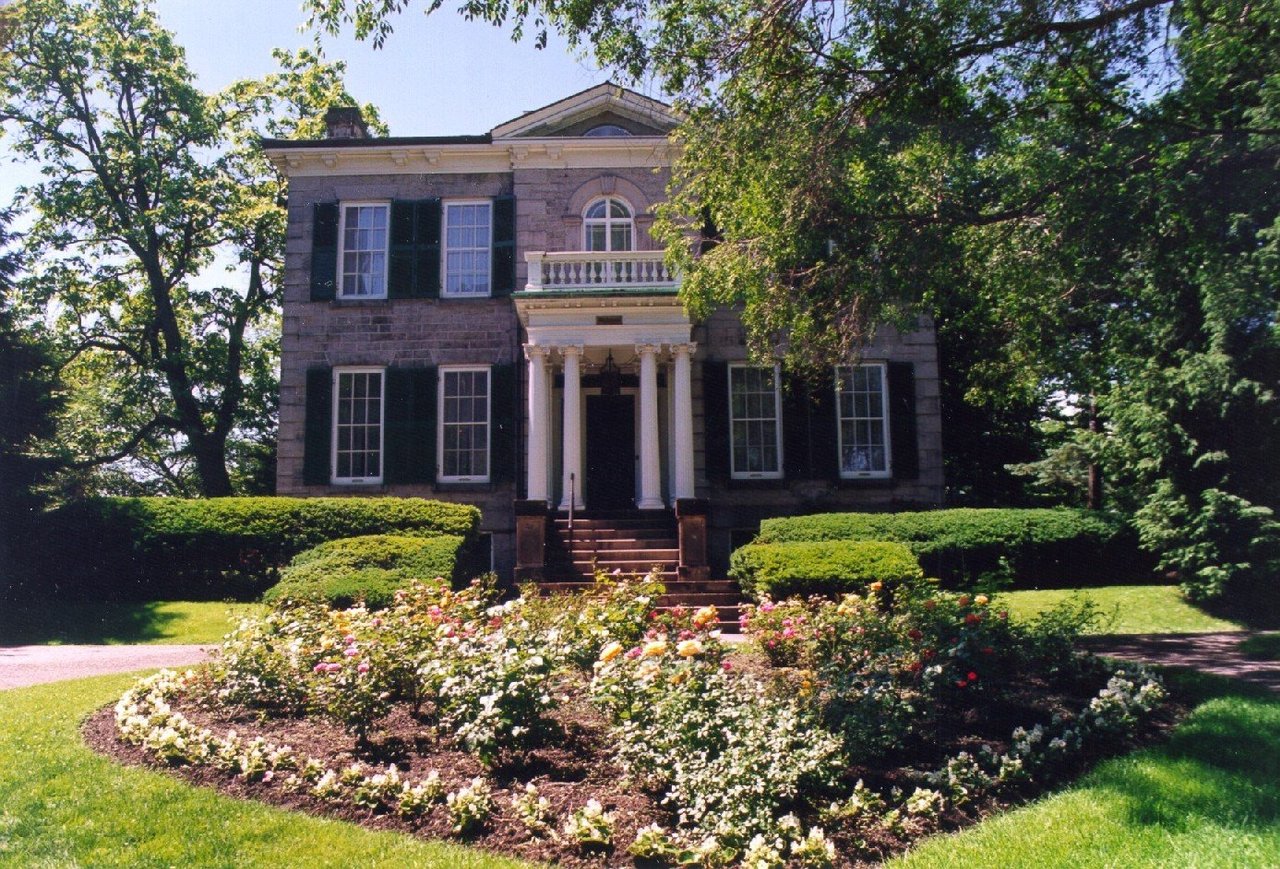 The former home of the McQuesten family showcases local history starting in 1850 (when it was built) up until 1939. This downtown museum is notable for being historically intact and its gorgeous walled garden. A real urban oasis.

While currently closed to visitors, this National Historic Site is still a stunner from the outside and one of the city’s most photographed buildings.

There’s a riot of colour and inspiration around every corner of the downtown core, if you know where to look, thanks to a huge variety of street art, murals and public art. Just a few highlights to look for include:

Catch of the Day, a giant bold mural at Hughson and King William Streets, by famed muralist WERC featuring flora and fauna including a giant eagle and fish.

Gateway Mural by local artists Vivian Rosas and Vesna Asanovic celebrating this city’s diversity of culture and landscapes. Find it along James Street South, across from the Hunter GO Station

Helping Hand by Scott Martin, the artist behind Burnt Toast Creative, can be found just steps away on Hunter Street East. This piece, with a large blue sky with marshmallow clouds and a cartoon figure resting on a hand, was a contribution to the 2019 Concrete Canvas Festival.

Find live music in every corner of downtown from international arena acts at FirstOntario Centre to more intimate performances at venues such as Casbah and Bridgeworks.

Learn about downtown Hamilton’s fascinating history through the stories of some of its most treasured buildings. Downtown Hamilton BIA offers an in-depth self-guided tour called Memory Lane with scannable QR codes revealing incredible stories and vintage photos.
Or take yourself on a self-guided architecture crawl with our guide to some of downtown's most noteworthy and inspiring buildings. 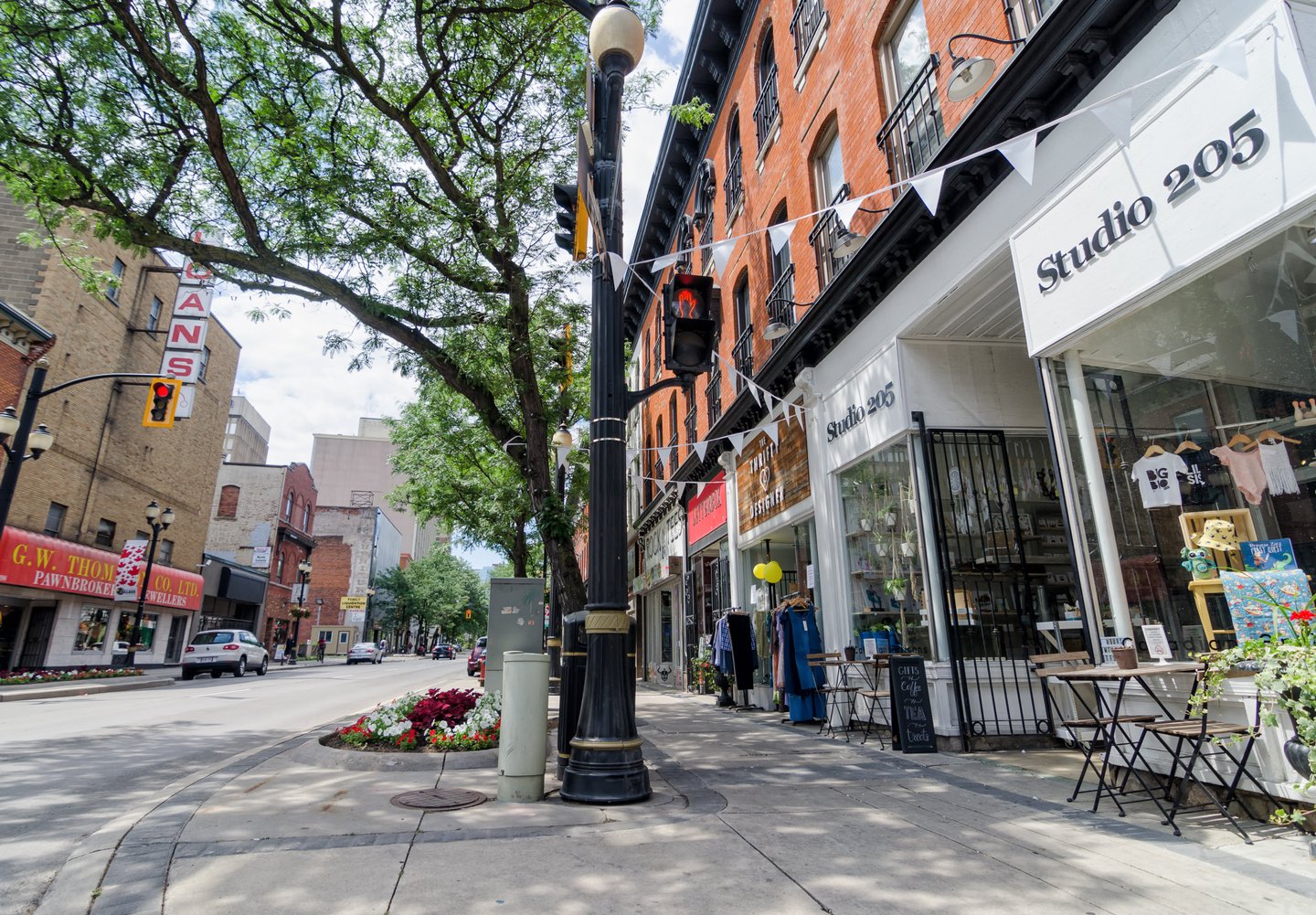 If you love music, follow the beat to this well-loved retailer on Wilson Street. It sells new, used and imported CDs, vinyl and DVDs – some rare and hard to find. The staff is super helpful so don’t be afraid to hum a few bars. They’ll know the song you’re looking for.

This downtown shopping mall is conveniently attached to downtown hotel and meeting spaces and home to a variety of retail shops as well as a movie theatre, food courts and the sprawling Nations grocery store.

Just like the street it’s on (James Street North), this store is both pretty and gritty. Find housewares with a modern edge to decorate your home, from eye-catching door mats and barware, to specialty serving dishes and candles, here.

This destination fashion boutique has dressed stylish customers since 1964. Its excellent selection of designer brands is the main draw, along with superior service. Allow its experts to make suggestions about what will fit you best and impress.

Indulge your love of planet earth and all things beautiful at this gorgeous shop, focused on sustainable, ethically sourced products including fashion, home furnishings and all kinds of lovely little treasures.

This downtown stretch has a unique cluster of boutiques located on King Street East. Unique is the key word here. Vintagesoulgeek focuses on fashion classics from the 1920s to 1970s – many of which were used in the Oscar-winning film, The Shape of Water, shot partly in Hamilton. Or find handmade treasures from Canadian artisans at Studio 205 and grab a coffee to go onsite. Girl on the Wing is a must visit for lovers of well curated vintage finds and other lovely little things, both new and old.